Corona Pass, also known as Rollins Pass, is a high-altitude mountain pass in north-central Colorado, between the towns of Winter Park and Nederland. Part of the Moffat Road, Rollins Pass was the first railroad passage over the Rocky Mountains, before the Moffat tunnel was opened in 1928. The pass was used by railroad traffic from the early 1900s through 1928, and then thereafter has been used mostly as an scenic automotive drive.

In the summertime, I bicycle up Corona Pass several times a season. It’s great to get above the tree-line on a bicycle, and the pass road itself has access to many great single-track trails such as Broken Thumb, Twisted Ankle, and Rogers Pass.

In the winter, the road turns into a snowmobile heaven.  TheGrand Adventures company has the USFS permits for grooming much of the trails in the Fraser Valley, and Corona Pass is one of the major roads for their service (and for public use as well). As a result, it turns into a great road for fat biking in the winter. I’ve ridden this pass in Winter a couple of times each season, and it’s always been a blast.

This ride had been my New Year’s Day plan for a while, but it almost didn’t happen. It got down to -20ºF overnight at my place, and in the morning it wasn’t really warming up. But, thanks to some weather sorcery, it was actually warmer closer to the mountains. I left 90 minutes later than planned - at 11:30am it was -11ºF at my place, and 15 miles away at the start of my ride it was a whopping 8ºF. Cold, but certainly bearable, especially on such a bright sunny day. 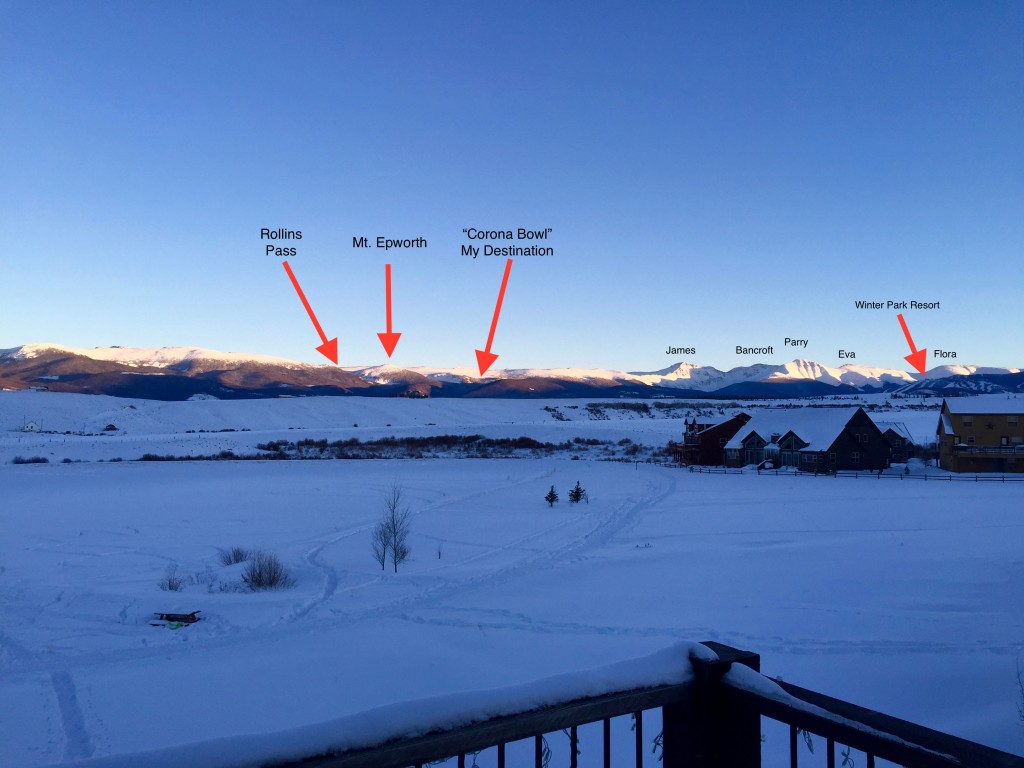 The road was in great shape on the way up - groomed, snowmobiled, and packed in well.

On the way down, enough snowmobile traffic had come up during my ride that the snow was really chewed up. In some respects that made for a better descent, as I had to pedal just enough to keep my heart rate up and that kept me from freezing as much.

This was the first time I made it all the way to the top of where the snowmobile traffic goes. What a great adventure, and great way to start 2016.

Scenes Along the Way 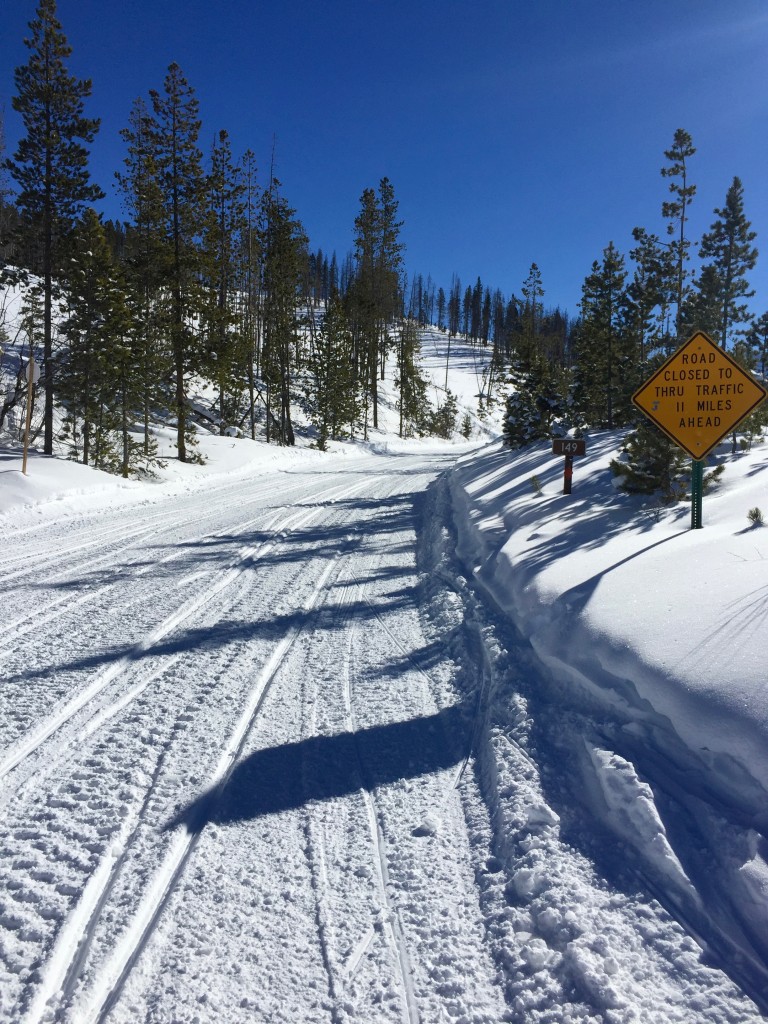 After a 3/4 mile climb over a rough snowmobile trafficked hill from the parking lot, I wound up on Corona Pass road. The Grand Adventures snowmobile rental company grooms the main road regularly. It’s a gentle grade (~3-5%) and a relatively easy climb up. The road closed sign is because the Needle Eye tunnel, on the Front Range side, collapsed years ago and they haven’t re-opened it yet. You can go all the way up from Nederland, and all the way up from Winter Park, but you can’t drive over - non-motorized traffic can make it over, though.[/caption] 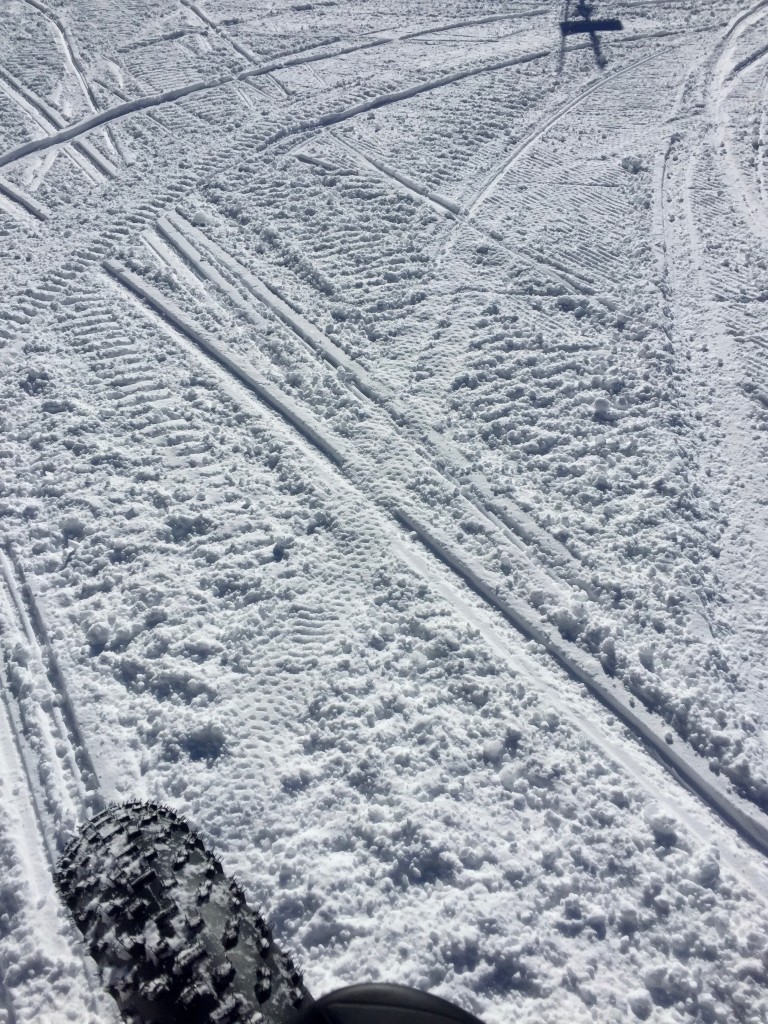 Only light tracks left on the super packed snow.[/caption] 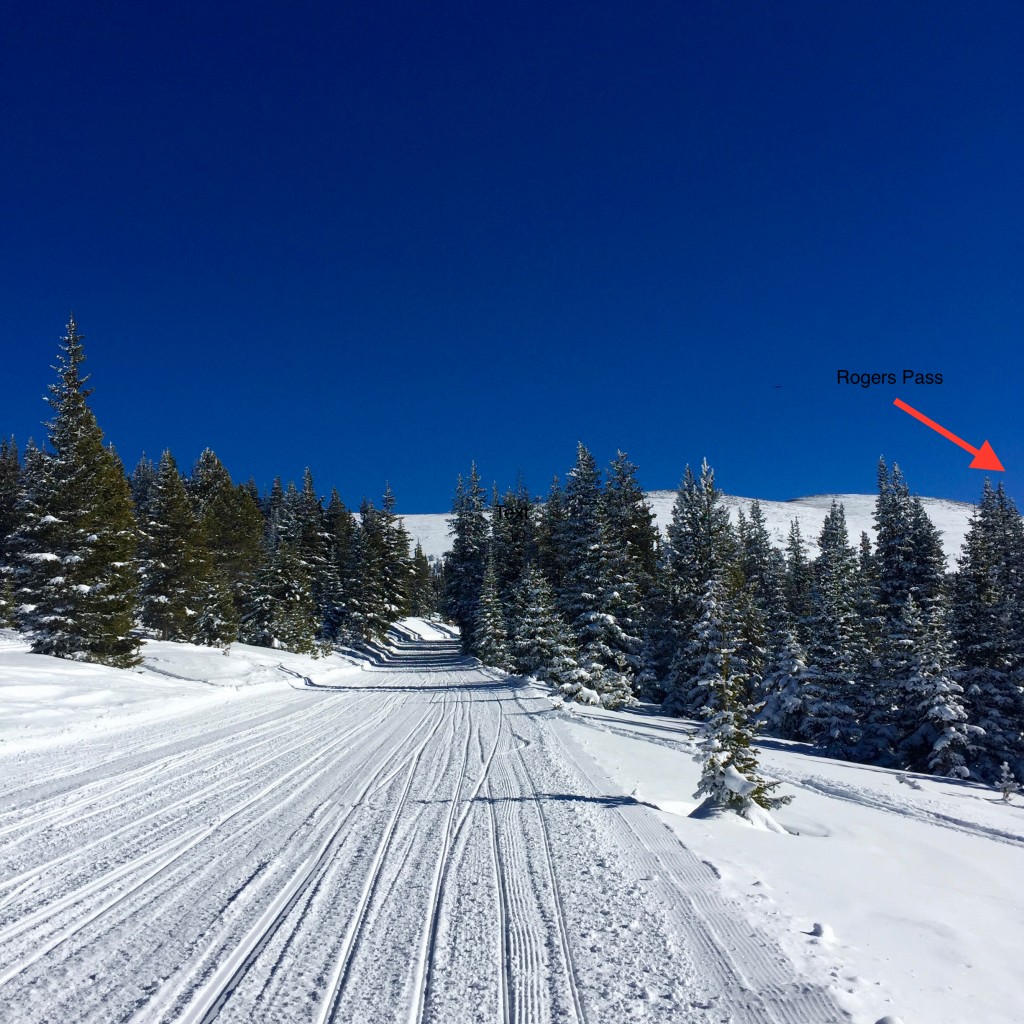 First big break with the treeline now closeby. Rogers Pass is in view, and Riflesight Notch is just ahead.[/caption] 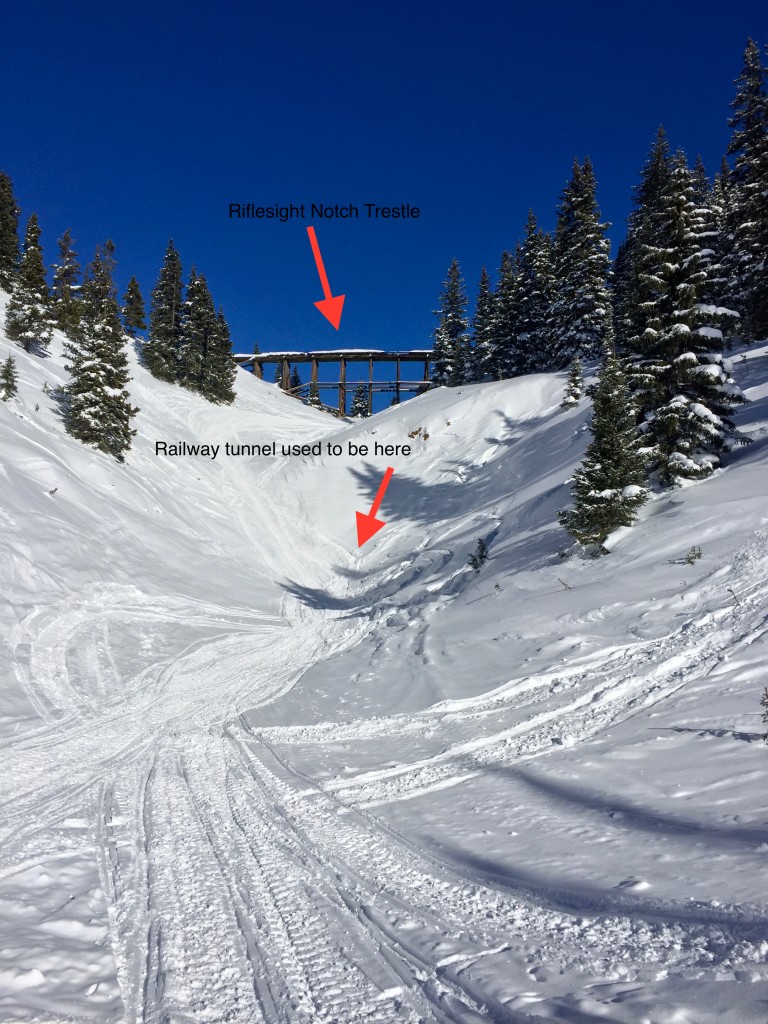 The famous Riflesight Notch railroad trestle. When the railroad ran, the tracks would circle down the hill and then come out underneath the trestle from a tunnel, hence the name.[/caption] 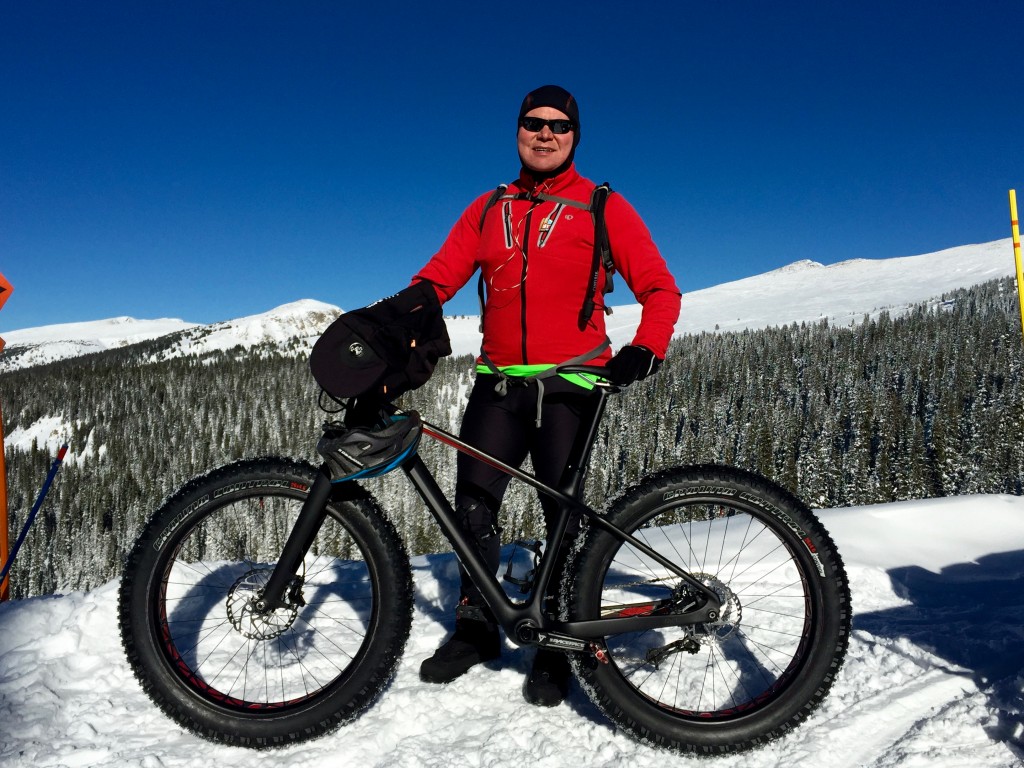 A friendly snowmobiler took my picture while next to the trestle. Mt. Epworth and my destination is just behind me.[/caption] 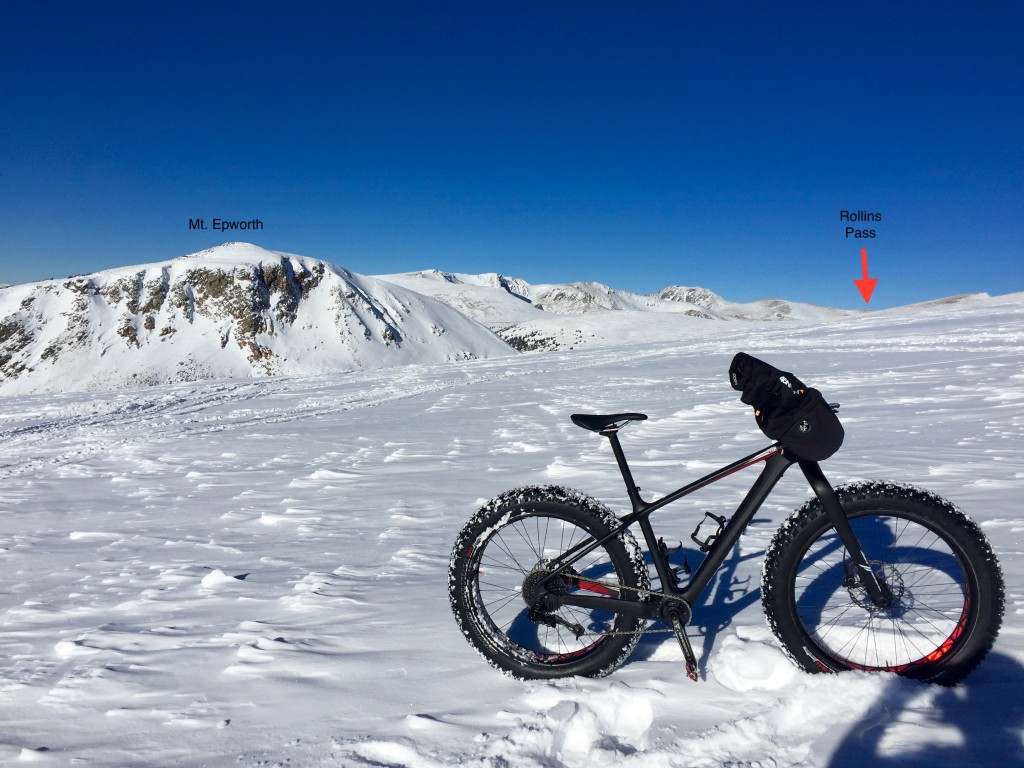 Welcome to the tundra. I MADE IT! This is as high as I’ve been in in the winter on any of my rides up here. Rollins Pass is about 2-3 miles in the distance, but the road isn’t groomed in the winter (enough for me to make it on a bike, anyway).[/caption] 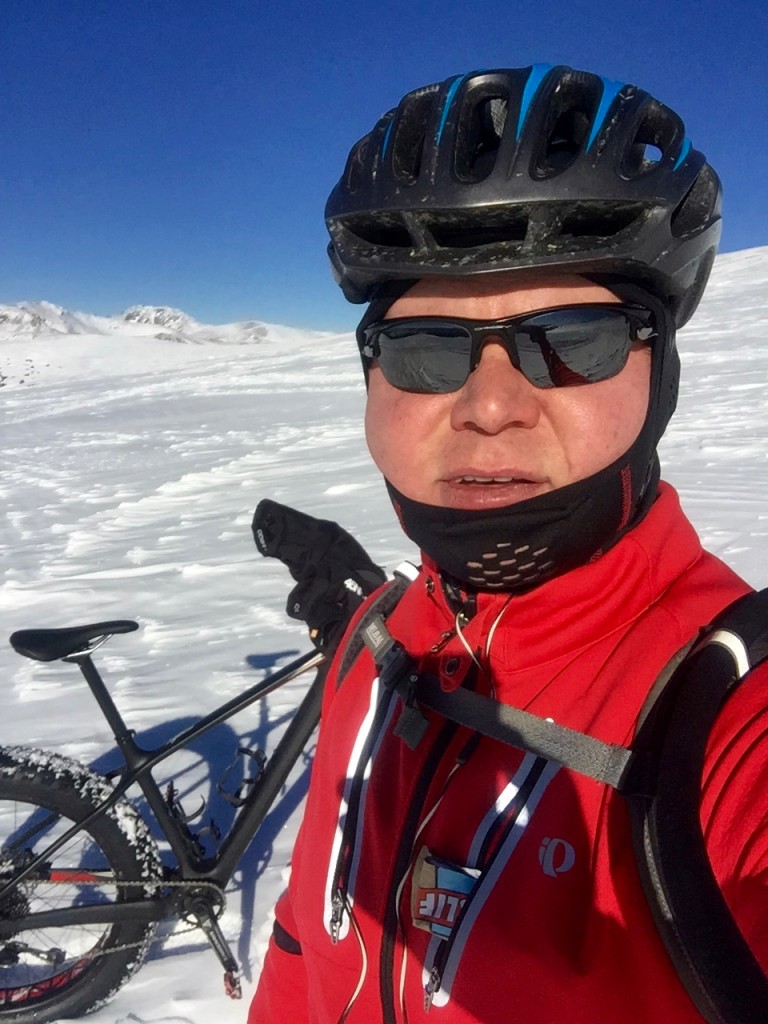 I’m still alive! Despite being very, very cold, there was no wind today - absolutely none. It was awesome up top.[/caption] 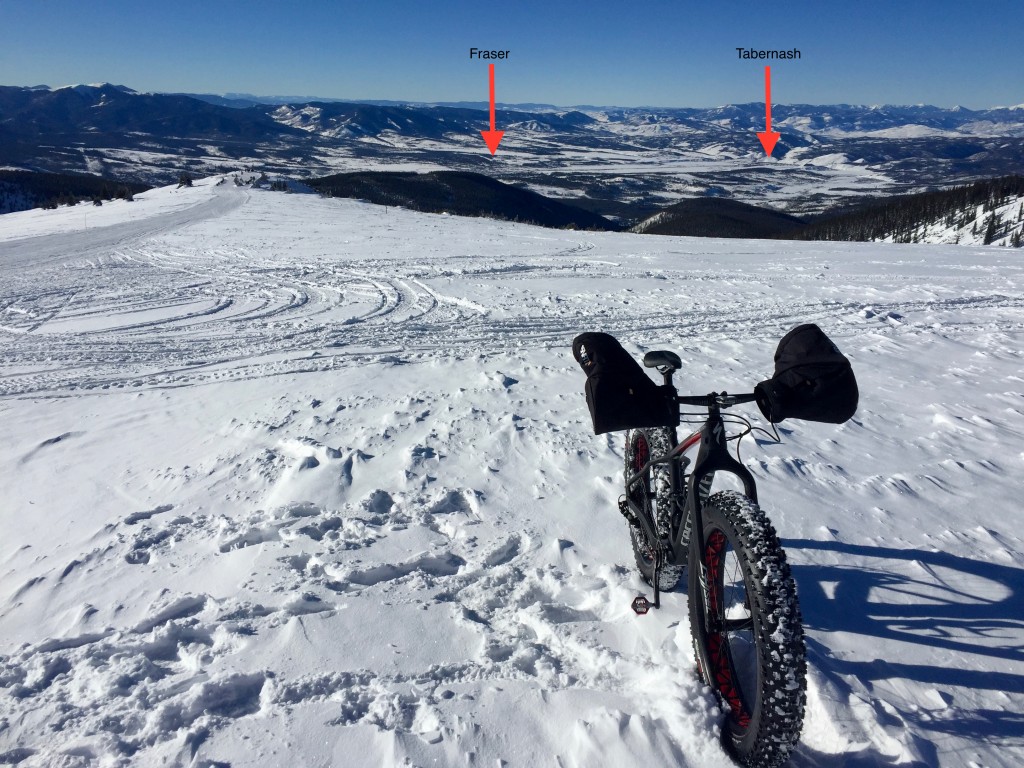 Looking down towards the Fraser valley from the top. You can see Fraser and Tabernash (my place!) far below.[/caption] 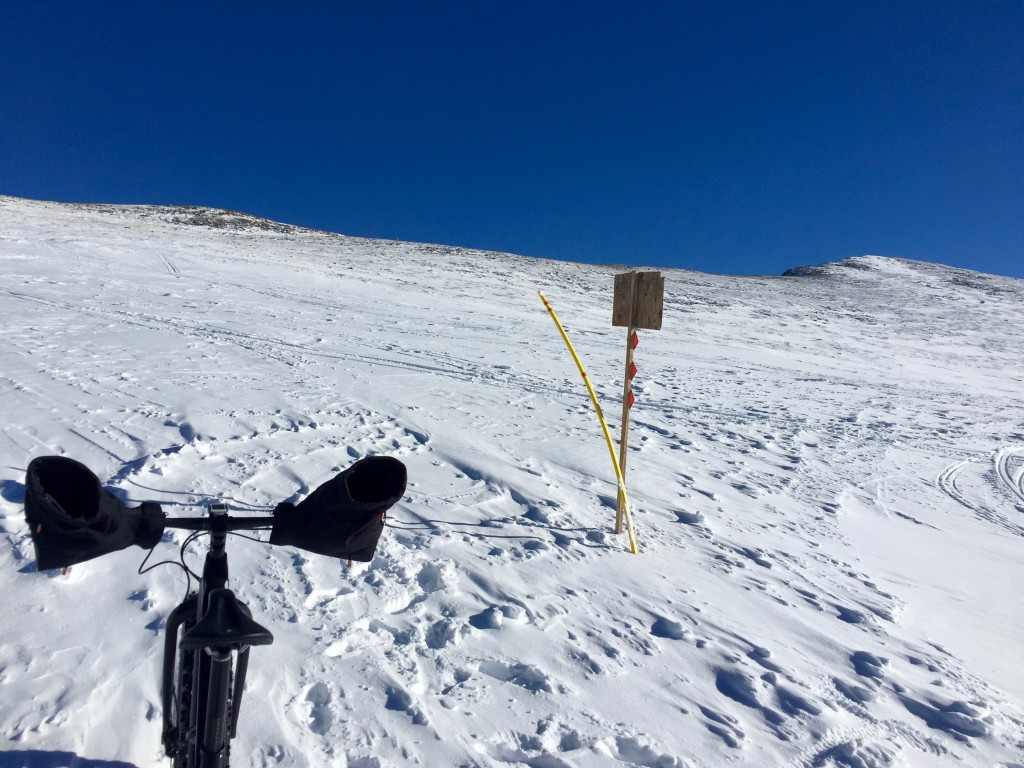 And there’s the Continental Divide! Just a hundred yards or so away. On the otherside is Nederland and then Boulder.[/caption] 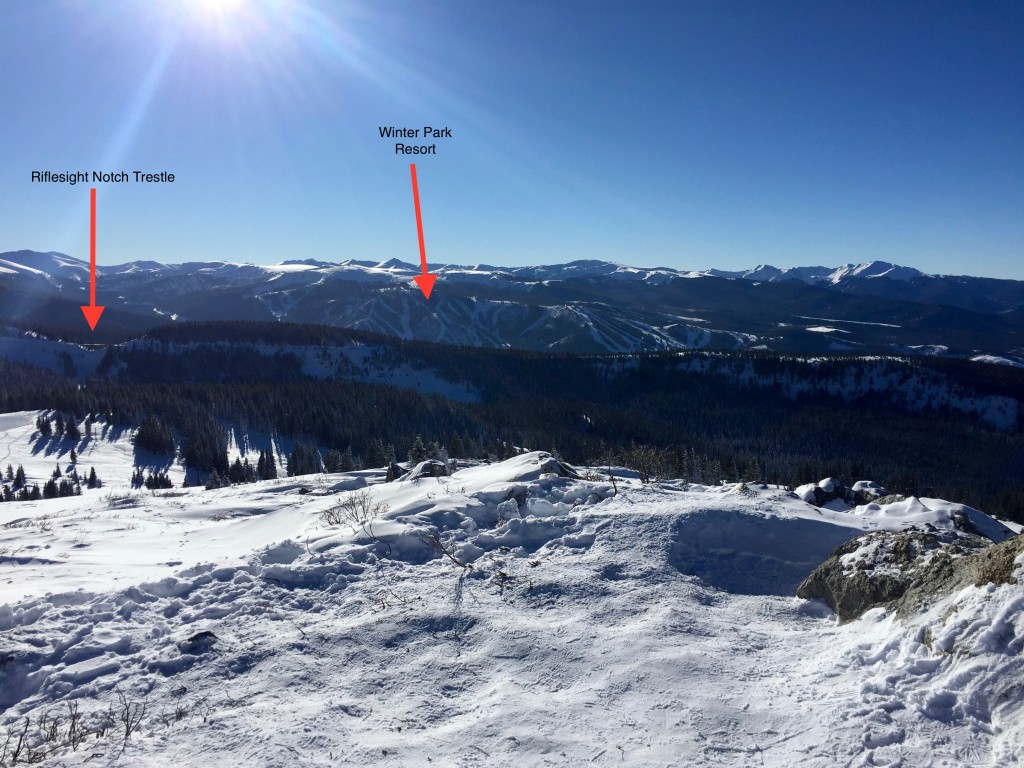 Looking towards Winter Park we can see the ski resort and the Riflesight Notch railroad trestle where I just came from.[/caption] 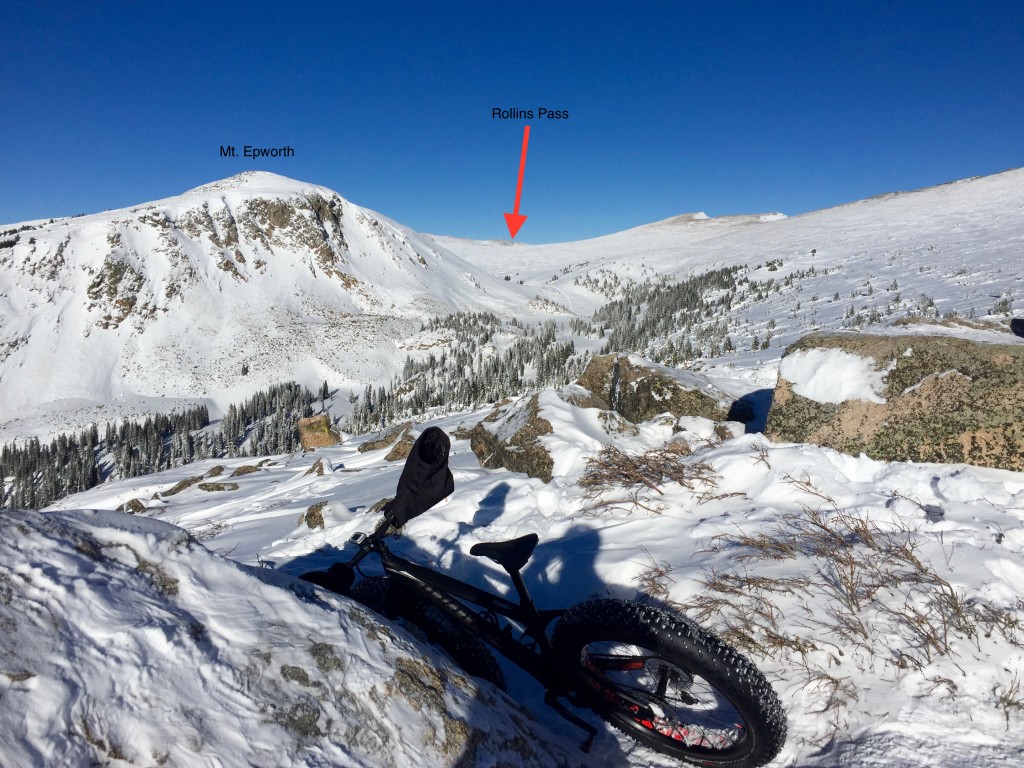 Looking back towards the North we can see Mt. Epworth and Rollins Pass in the distance. If you look closely, you can see snowmobile tracks the more advanced riders have made over to that area.[/caption] 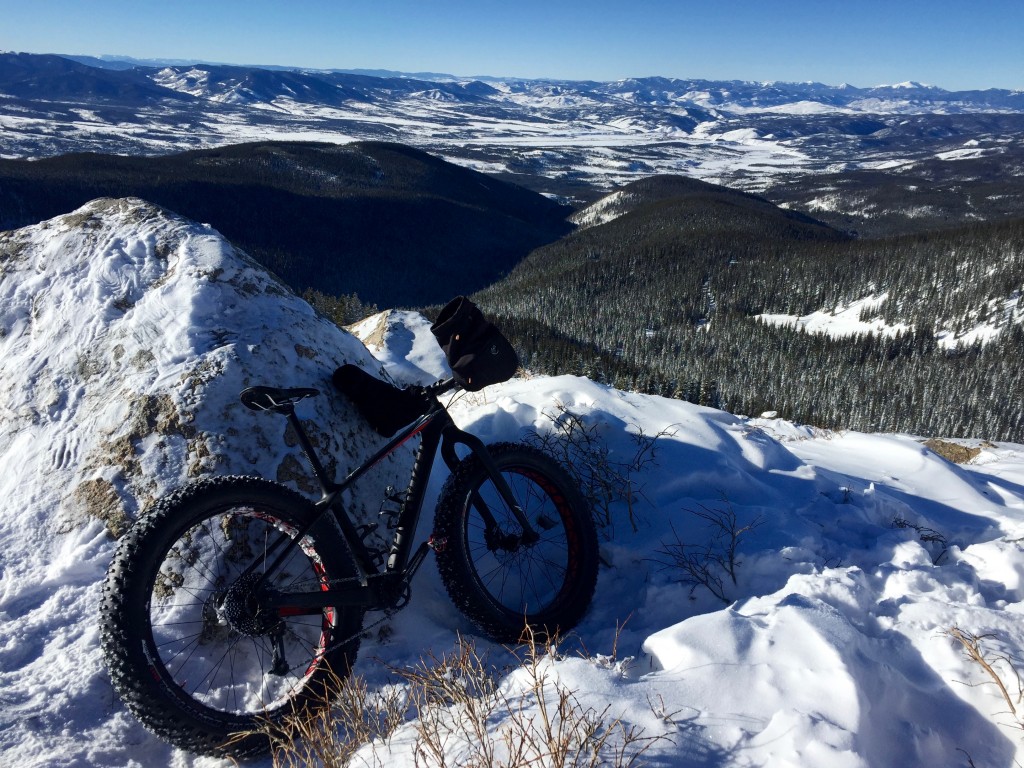 Further down the hill. In the summer, this rock is just above the main road. The snowmobiles all wind up here for the scenic view.[/caption] 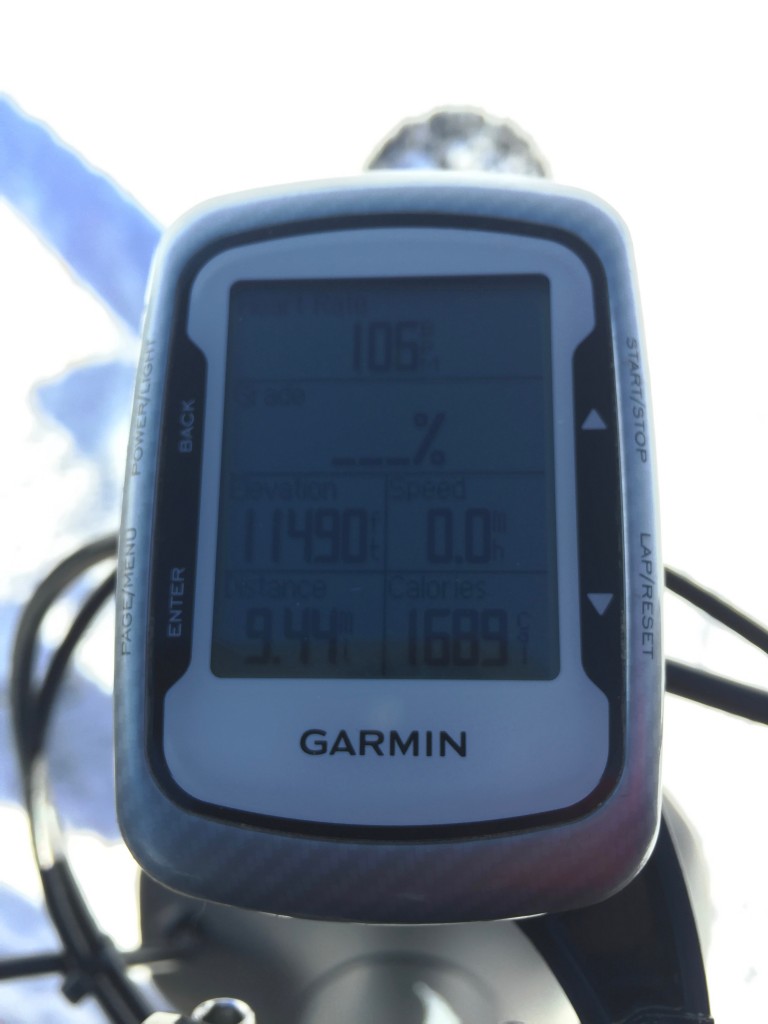 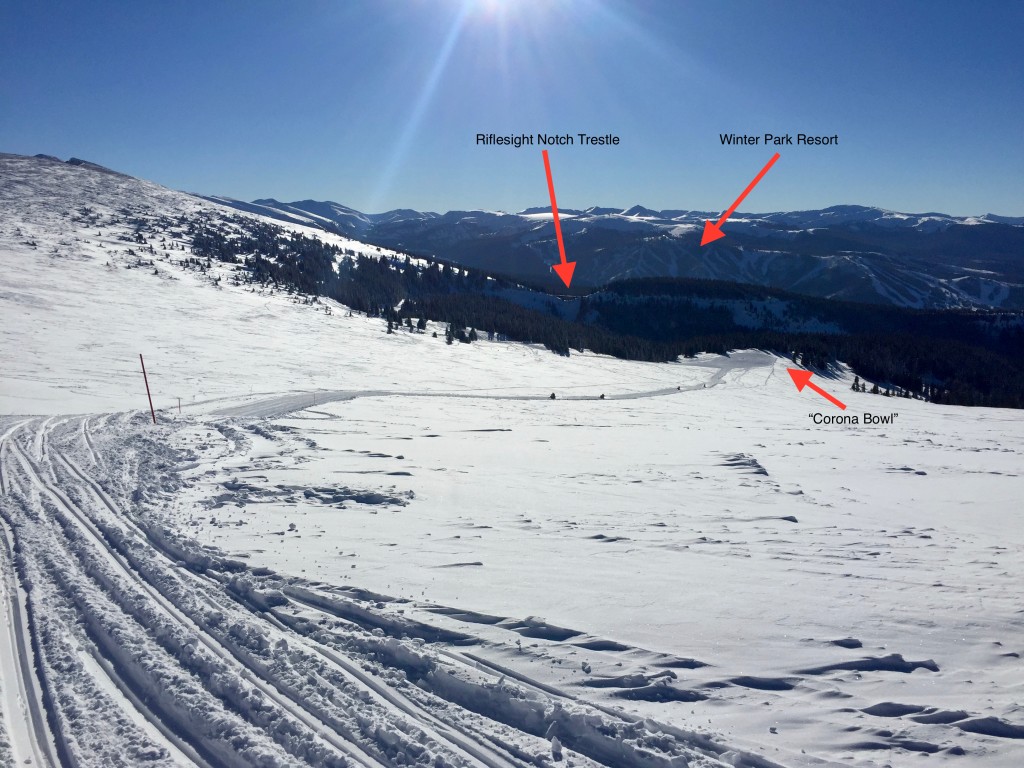 About to descend… this hill, down towards Corona Bowl, was actually too steep to ride up, so I hiked up. Coming down, a minute or so after this shot was taking, I built up too much speed and had a spectacularly fluffy powder crash. A little less air pressure in the tires would have helped that…[/caption] 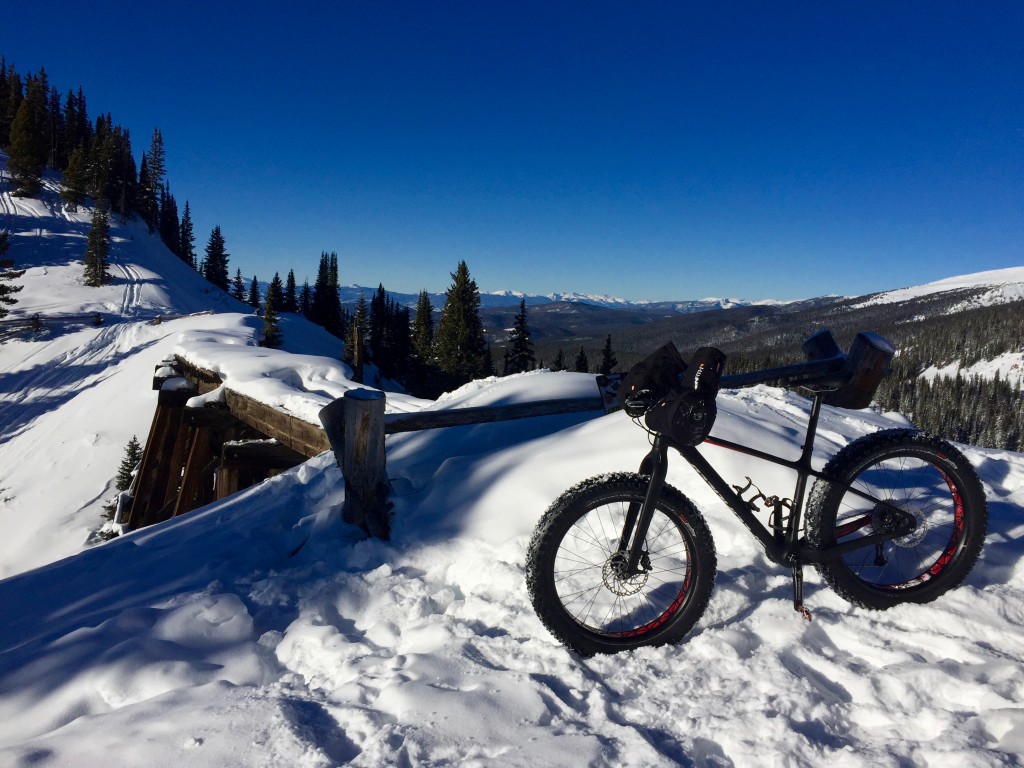 Back down at the Riflesight Notch railroad trestle… still early in the season so it is visible.[/caption]